Anna is a first generation immigrant from Iran who came to the United States in 1986 on a student visa in order to pursue an education. She continues to reside in America while her parents live in Canada. Although Anna does not adorn the hijab, she is proud to be Muslim and chooses to dress quite modestly because she believes that a woman should not expose herself. For instance, she chooses to wear the least amount of makeup possible so as not to draw attention to herself. She says, “not a huge shiny makeup, I think a little bit of lipstick, natural color most of the time.” Anna shares with us some information about typical traditional Iranian clothing and says that many Iranian women wear pants with a top that resembles a long trench coat and she says that most Iranian women dress like this is because they live in Milwaukee where it is cold many months out of the year. Therefore, the long trench coats or the tops that resemble a trench coat allow them to keep warm during the cold weather. 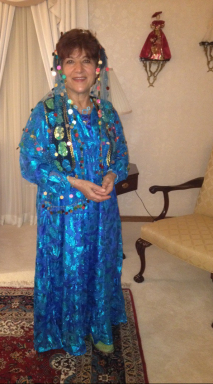 Monir Almassi is a first generation Iranian woman who immigrated to the United States in 1979 with her husband. Monir continuously instills in her children an awareness of their Iranian heritage. Along with holidays and recipes, cultural clothing is a reminder of the Iranian identity that she holds close to her heart. During her interview, Monir spoke about a dress she has from a region in Iran which the villagers make with many colors and a head piece. She described the dress as “fun and fancy” and not something you would regularly wear to a wedding or traditional event. She wanted to have “a symbol of clothing of [her] city”, she asays that when you look at Iranian cultural clothing you can tell which part of Iran the dress was made in. Monir is always excited when she puts on the dress because she feels that it connects her to where she grew up.