This website is an abundant source of collective testimonies that provides valuable contributions to American immigration history  and shows how cultural and Islamic dress influence individual and group identity. Material culture such as dress, asserts identity, culture, and heritage. Because a fundamental aspect of culture is sharing stories that can impact generations, communities and individuals thrive on personal narratives that can inspire and motivate others:

“As women narrate their stories, they raise a variety of important issues that tackle social, economic, cultural, and political assumptions. Women’s eagerness to tell their stories from the perspective of a protagonist highlight their conviction of their key role in writing and shaping their family and group history.” – Dr. Enaya Othman President of the AMWRRI Board of Directors and Professor at Marquette University.

These testimonies reveal that women’s identities and perceptions are multifaceted; they also speak of an array of determinants that influence the degree to which integration and acculturation shape identity. These factors include the level of education, time of immigration, the consistency of keeping ties with the homeland, the geographical region from where they migrated (village, refugee camp, city, and country), their contribution to family economy, and the level of interactions with members outside their ethnic and religious group. Consequently, as each of the stories addresses its multiplicities and uniqueness, simultaneously it shares communality, a general pattern that connects them to their group’s history.

To what extent does dress express cultural and familial identity? How persistent are women in transferring such a cultural marker to their children and grandchildren? How is fashion an expression of aesthetics? The testimonies gathered so far highlight the importance of cultural as well as religious clothing (hijab or head cover) and its meanings to various Arab and Muslim women who immigrated from different Arab and Muslim countries. Women from different generations continue to recreate or adapt different elements of their cultural dress. For example, some women, especially first-generation immigrants, wear their cultural and ethnic clothing daily; others wear them during special celebrations, events, family visits and holidays. Furthermore, many women such as those originally from Palestine, combine wearing cultural and Islamic dress to confirm the linkage between religious and cultural elements in their personal identity.

It is vital that we all value and understand the importance of appreciating diversity  in  dress and appearance among communities living in the Greater Milwaukee area and we believe that Muslim women’s heritage preservation contributes greatly to Milwaukee’s multicultural and plural society. 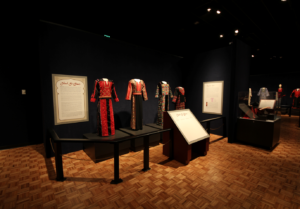 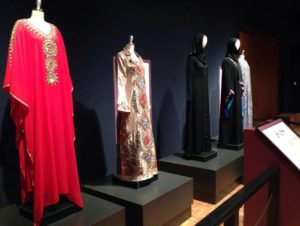 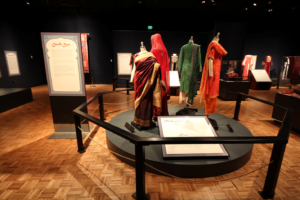 Abaya – A common Islamic dress originating in the Arabian Peninsula. This black, long-sleeved robe-like dress that comes down to the floor can be plain or decorated with embroidery, beads, etc.

Annole or nowl – A form of embroidery most prominent in Palestine in which the thread is looped and stitched into specific shapes and patterns either through hand needlework or machine using torus or al-tara, as it’s called in Arabic

Banayiq – Side panels on a traditional dress

Bushiya – A semi-transparent veil that covers the entire face

Debka – A folkloric dance that is very popular in the al-sham region, especially in Jordan, Lebanon, and Palestine

Dishdasha – An ankle-length garment, usually with long sleeves, similar to a robe and typically made of heavier materials such as cotton or wool: the sleeves and collar can be stiffened to give a more formal appearance.

Duputta – A long piece of fabric, worn in South Asia, that drapes over the chest or is drawn over the shoulders and wrapped around the head completely, similar to a shawl

Galabyeh –A long, modest dress worn in Egypt by women from the countryside and lower class women in urban centers

Gharara – Cultural clothing generally worn by women in India during special occasions, consisting of a short tunic (kurtii), a shawl (duputta), and a pair of wide-legged pants that flare out dramatically at the knee

Jellaba – A traditional, long and loose-fitting outer robe with full sleeves worn in the Maghreb (North Africa west of Egypt)

Kaftan – A traditional dress worn by women in Morocco; it is ankle-length and is similar to a robe with full, wide sleeves, mainly made of cotton or silk, and featuring a variety of colors and patterns

Kharqua – An accessory typically worn with a thob: a light shawl worn loosely on the head and around the neck

Lehenga – A popular bridal garment in India: a long, embroidered and pleated skirt made of fabrics such as silk, cotton, satin, and chiffon

Mallaka – A royal dress, literally, “an angel’s dress,” made of striped velvet and embroidered in the couching stitch, it is traditionally worn by village women and some brides in Palestine

Nowl or Annole– A form of embroidery most prominent in Palestine in which the thread is looped and stitched into specific shapes and patterns either through hand needlework or machine using torus or al-tara, as it’s called in Arabic

Roomi (rumi) thob – Long-sleeved dress made in Ramallah, Palestine of white linen embroidered with cross stitching in wine red silk; white rumi thobs were made for summer months, and black linen thobs were most commonly worn during special occasions and the winter months

Sari – A popular garment among upper class Indian and occasionally Pakistani women; it is commonly worn to formal functions, such as weddings, and can be decorated with many embellishments, such as mirror-work. It is usually worn over a petticoat, with a blouse with short sleeves and a low neck, usually cropped at the midriff, forming the upper garment

Sfifa – a material used for the design of traditional Moroccan dresses, usually on the elaborate over-dress of a takchita

halwar Kameez – The most commonly worn outfit in South Asia consisting of a loose trouser, a long tunic, and a shawl

Shisha – A type of decoration consisting of small mirrors attached to the fabric to reflect metal, commonly seen on a lehenga or gharara

Takchita – Most commonly worn by Moroccan women during weddings, is composed of two pieces: the first layer is a dress, often fine but not ornately decorated, and the second layer or over-dress often buttons up in front, often richly embroidered with beads and sequins

Thob – The exact translation in Arabic is “long dress”; culturally, the thob varies in its meaning from one region to another; in Palestine and Jordan it is known as a long-sleeved long dress that can either be hand- or machine-made and decorated with geometric motifs such as triangles, squares, and rosettes. Men in the Gulf area wear the long white outfit also known as thob or thawb